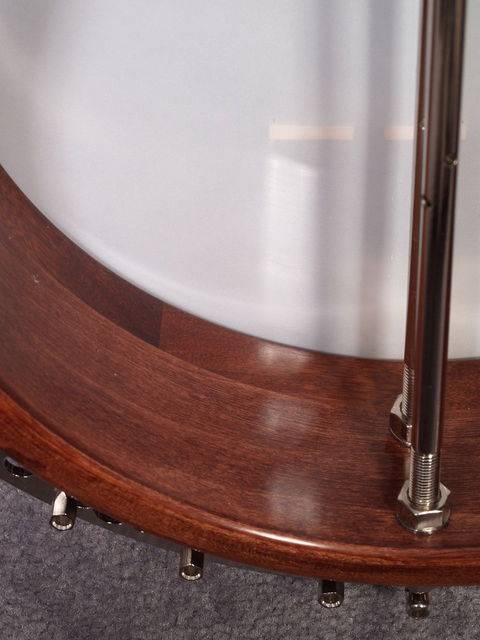 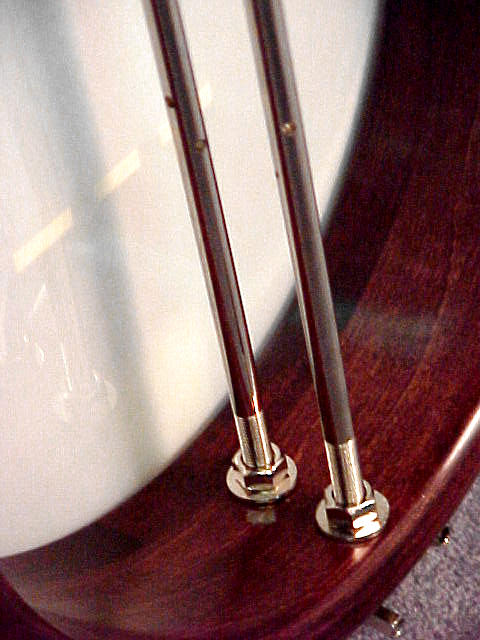 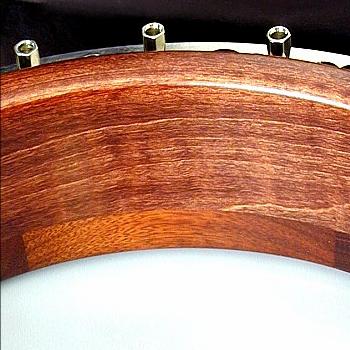 ABOVE: Three views of the grenadilla tonering in a John Hartford model banjo by Deering.

While I was at Roots Music Camp in Colorado in 2006, I had the chance to play a John Hartford banjo with a grenadilla tonering. I was amazed that a wood tonering could project such depth of tone. I had it in mind that, given the chance, I would try making a rim topped with grenadilla. My research on the topic has culminated in the Hickler Banjo Grenadilla Policy.

When I began my research, the first order of business was to track down clues about the Hartford banjo tonering. A lengthy online search yielded the photos above. I knew from the official line from Deering that the tonewood they use has also been used in woodwinds and marimbas. African blackwood (Dalbergia melanoxylon) fits nicely into the category of woodwind uses, but does not resemble the photos I obtained; nor has it been used to any great extent in marimba bars. Cocuswood (Brya ebensus) has been used in woodwinds and resembles the Deering tonering. I never discovered any reference for its use in marimbas. When I tried to get some cocuswood for experiementation, it soon became clear that it is not available in useful quantities and is extremely expensive. Apparently the useful crop of cocuswood was depleted decades ago. The cocuswood plant is not a tree, but more of a shrub making boards of a useful dimention extremely rare.

The few clear sticks I have seen advertised for making woodwind instruments calcualted out at $300 a board foot! I have since begun to suspect that the wood used by Deering is Platymiscium yucatanum or similar species. It is freely referred to as "grenadillo" by several exotic wood suppliers. It is still available in useful dimensions has similar color and density and comes from the same part of the world (Central America). Tests so far reveal a very satisfying full voice from tonerings made of P. yucatanum. I have found references to P. yucatanum used in marimba bars, but not woodwinds.

In addition to the Platymiscium genus, I am including two Central/South American rosewoods in my research: Dalbergia Stevensonii and  Dalbergia tucarensis as possible grenadillas. These rosewoods have been used in woodwinds (primarily wooden flutes) and in marimba bars. Taking Deering at their word (i.e., used in woodwinds and marimbas), these are likely candidates for the Hartford tonering. Dick Boak, Manager of Martin Guitar's wood division stated in an article entitled "The Rosewood Jungle" that the term grenadilla has been used loosely for brown Central and South America hardwoods, sometimes as a catchall term for similar woods of undetermined species.(1) 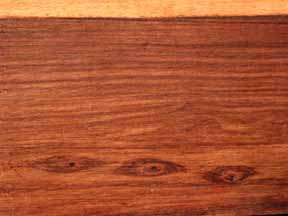 Grenadillas: It's All in the Family

The following chart shows the close familial realationship between species which the common name grenadilla comprises. The shaded area highlights the species for which Hickler Banjo LLC will use the term grenadilla in its product descriptions:

(1) Dick Boak, The Rosewood Jungle. www.forumsamerica.com (use the words "rosewood jungle" in the site's search engine) or Google "Dick Boak rosewood jungle." This is an excellent article and well worth reading.